Being an atheist is not an easy thing. We are never given respect by politicians, not even those touchy-feely kind who celebrate a country in which Christians and Jews and Muslims and Hindus can all worship together in harmony and peace and blah blah. Atheists? We don’t get to worship in peace.

Oh, wait. You say atheists don’t worship? I was out on Pt. Reyes last week, walking through the insane proliferation of wildflowers at Abbotts Lagoon, I several times stood and gazed and marveled and, yes, worshiped nature in all its unexpected bounty. You gonna say my worship was somehow less profound than yours?

(Here I am speaking to imaginary religionists I have brought along to be yelled at from time to time. But, well, read Psalm 139. They really really don’t like us. There’s also an alt-right website called “God Hates Fags,” so, well, lotta hatin’ goin’ on.)

Worse than that, an international poll revealed that most people believed that serial killers were more likely to be atheists.  Sure, atheists are more prone to violence. Just think of the havoc we unleashed by the great atheist Crusades of the Middle Ages. Or the terrible atheist Jihad that has ripped up the Middle East. Oh, and we also have opinions about eating pigs. And cows. And shellfish. Oh wait, no we don’t.

We figure that, since God doesn’t exist, he is unable to have opinions about your food choices. (Although atheists are suspicious of sugar, but for entirely rational reasons). Oh, and here’s the really good news: Atheists do not care about your sexual activity. I mean, you should try to be safe at all times, and try not to have sex with anyone with a tattoo that says, “God wants me to fuck you up.”  But in general, atheists have enough to do just trying to get to work on time.

And there are 9 million atheists in the United States. And that’s just self-described atheists. Roughly a quarter of Americans identify themselves as “religiously unaffiliated.” I surmise that most of those are atheists who are afraid to say the word out loud. And do you know what that means? Eighty million atheists in the United States. We could elect presidents if we stood together.

God’s choice and an engineering degree!

Alas, slogans are hard to come by. “Have you heard the good news about the yawning void?” doesn’t really have crowd appeal. I thought of “You’re not going to be saved because saving isn’t a thing,” but that doesn’t have the proper gentle tone. “Every person a godhead” has some charm, and pagans might like it. (Paganism is of course a religion,  too. They’re really serious about the Solstice.)

Atheism needs a name that isn’t, well, “atheism”.  Something like “Beautifulism,” which doesn’t mean anything but sounds fun. Or “Mountain Lupine,” because everybody likes mountain lupine.  Or “Dr. Kilgore’s Very Fine Alternate Belief System and Doo-dah Band,” which I was pushing hard for until the experts set me straight.

“We really don’t have the resources for a doo-dah band at every service,” they said.

Which is too bad. Atheists have never looted the art treasures of the world, nor have they taken over a random nation or two.  Although, a more enlightened atheist (“Enlightened”! Religion or not, eh?) might say that we should be proud of our lack of appropriated art and political power. You want a pure religion? Atheism is without flaw or error. Enter into the temple of unbelief and rest your burden down. We will show you pictures from the Hubbell telescope that you really won’t believe. The universe: So very cool. Atheism allows you this joy. Celebrate!

(Yes, China and Russia are avowedly atheist countries who between them killed 80 million or 100 million people between them. But they each had leaders who wanted to be thought of as a god, so it was basically that old-time religion except with lots more marching.) 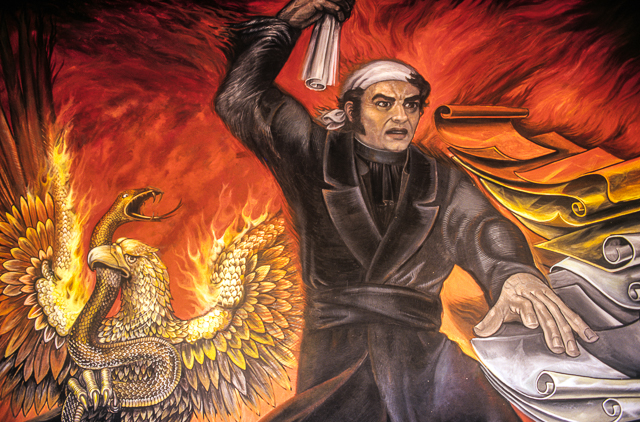 My point is that we need to remake atheism to appeal to the masses — without losing our essential belief in a lack of god or any other higher power that steers the stars, blesses wars, renders wine holy, controls who gets cancer, and thinks murder is an appropriate punishment  for young girls who’ve been raped.

So let’s at least come up with some talking points for our poor misunderstood god-denying way of life.

I’ve already mentioned some of them. The sensual passion of freedom of thought has much to recommend it. You can approach the great mysteries of life without an annoying Abrahamic God giving you orders. So relaxing!

(I am aware that every religion is not monotheistic. Hindus have more gods than Catholics have saints, and it’s anybody’s guess how many Buddhas there are. Nevertheless, I live in the United States and we got a lotta Christians and a fair number of Jews and Muslims, so I should deal with religious reality. Plus, I was raised Christian so I know where the jokes are).

But let’s consider the political implications of atheist visibility. There have been numerous lawsuits over the years about school prayer and other religious expressions. Mostly, those arguments center around the First Amendment guarantee against government expressing opinions on matters of faith (“Congress shall make no law respecting an establishment of religion, or prohibiting the free exercise thereof”).

The meaning of that clause seems evident, but it can be cut and sliced in so many ways, because lawyers. But here’s a legal approach that hasn’t been used before:  Promoting religion in  public schools is unfair to the atheist children.

Did you feel that frisson? Atheist children. Americans do not believe in atheist children. They think of atheism like lust, or back problems — diseases of adulthood. Children are closer to God and therefore know him intimately, emotionally, and are happy to lisp out sentiments of praise. Children failing to die are seen as an example of God’s grace.

That’s not the real world. Lots of kids are atheists; lots of kids are just pretending when they go to temple or mosque or church. Instead of pressuring them to conform, we should celebrate their ability to form independent opinions.

All 80 million (est.) atheists in this nation will feel vindicated. They will understand that they are members of community, people with no sexual guilt and free weekends. We just need some nice singable hymns. Oh, and a creed, which the atheists could refuse to follow.

Happy atheist with her spirit animal

This column grew out of a conversation on The Well,  a small social network with no ads, no trolls, no bots, no Kardashians anywhere. Are you a person of mature years who thinks discussing Game of Thrones or arguing about gluten might be amusing? Come on down!