I  came to West Marin at a low period in my life. I was grieving, I was moping, I was angry and confused. Even worse, my problems were mostly of my own devising. All I could do is wave my fist impotently and say, “Damn you, me!”

Yet every time I drove out Lucas Valley Road, I could feel the tension lifting from my shoulders. I’d get to Big Rock and feel lighter. By the Nicasio Reservoir, I’d start to hum. By the time I got home, I was grinning. At times, things are so perfectly beautiful they can make you giggle.

West Marin was sanctuary. There was nobody I knew up there, which was great. I liked the rural exotica of Toby’s Feed Barn and the Palace Market, where you could get a nice goose to cook if you didn’t ask too many questions.  I liked the Dance Palace — which back then was just a big room on the main drag — and the photography of Art Rogers.  (That’s my friend Connie Morse on his home page; didn’t know that). I liked the Point Reyes Light, soon to win a Pulitzer Prize.

But most of all I loved Point Reyes. Tracy and I would take all the hikes on offer. We would hump backpacks out to the Wildcat campground, or just stroll along Bear Valley. We’d find places to view sunsets, and then view them there, and come back to a nice piece of fish and a bottle of wine.

Still, I was morose. I was more or less unemployed. Some friends were no longer speaking to me. Every tether in my life had been cut, mostly by me. I needed the Point viscerally. I needed to see another red-winged blackbird, another crashing wave, another carpet of wildflowers. I needed to see cows; lots of cows, always artfully arranged.

I needed to figure out whether or not I was a total asshole.

Tracy helped. Did I mention that?

The place names of West Marin have a totemic quality for me. I can say “Palomarin” or “Estero,” over and over, and they never lose their power.

As you might expect, we went back to West Marin many times over the years. We lived in nice houses when their owners were on vacation. We took the same walks. We shopped in the same stores. We even ate at Vladimir’s one more time, which reminded us precisely how weird the old place really was.

West Marin changed a lot. The tourist economy boomed while the fishing economy cratered. Gift stores proliferated; useful businesses went under. Toby’s added a coffee bar,  an art gallery, a performance space. The Dance Palace moved to shiny new digs. The weekend traffic around the bakery was so clogged with motorcycles and bikes that it looked like a peace-and-love version of Sturgis, South Dakota.

But we kept coming back. We had a few friends there, and we visited them. We brought our children and later our grandchildren along on day trips, and of course we visited the legendary sand dunes at Abbotts Lagoon.

Last weekend we went back to West Marin. Part of it was business, sort of — I’d been asked to be part of a benefit for KWMR, an excellent community radio station covering the coast from Tomales to Bolinas; now  available in San Geronimo. I was reluctant to do the gig because I loathe the possibility of failure. The KWMR people and I talked, and now I’m doing it. Argh argh performance anxiety argh argh.

The meeting concluded, we went out into the Point, exactly as we have a hundred times before. We went to North Beach because it was windy and we knew there’d be dramatic waves. But it turned out to be a little too windy. 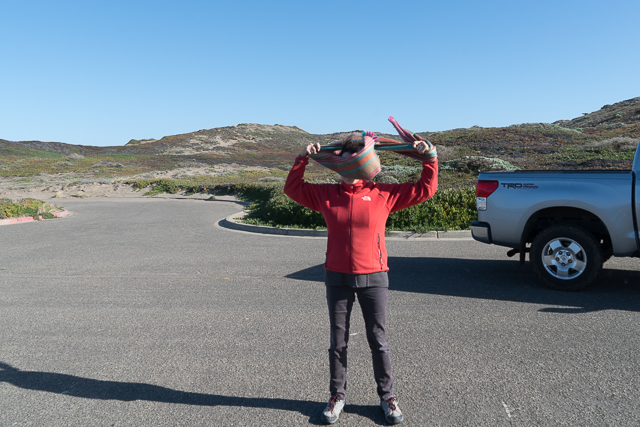 There was sand stinging our faces. We had certain balance problems when a gust came along. We sought refuge behind the bathrooms, which were an effective windbreak. When we realized we were reluctant to leave our shelter behind the chemical toilets, we thought perhaps we weren’t having fun. We thought we’d try a more protected place.  Drake’s Beach!

Uh, no. Still way too windy. But there was this:

Apparently their population was thriving at the elephant seal rookery further toward Chimney Rock, so the stragglers and losers relocated to Drake’s Beach, hanging around and blocking popular paths to the water’s edge. They were casually magnificent, and we thought the beach should remain theirs. Also: stinging wind.

So we got back in the car and back to town. Perhaps, we thought, we could get a nice chicken at Tomales Bay Foods, eat it on the way home.  Or something else. We were in wandering mode again.

I thought about maybe making a blog post out of the day. I have photos, after all. Probably should have an ending, though. So I asked myself, do I have useful thoughts about my period of doubt and blame so many years ago?

I do not. Shit happens. Move on.

Photos by Tracy Johnston, except for the one that obviously isn’t.

22 thoughts on “Getting to the Point”