A year or so ago, I said that it was time for white people to stop explaining things to black people. Yes, I know, civic engagement and shared struggles and maybe the First Amendment, but stop. If you wish to discuss the race question with other white people, go ahead. But probably, after six centuries (at least) of defining the narrative, maybe white people should stop and listen.

I can say this with confidence because I know my readers are overwhelmingly white. Hello, white people! Let’s get together and eat cheese!

For instance: The lame response to “Black Lives Matter” by lots of white people — “hey, all lives matter.” Well, of course they do. That’s not what the slogan means at all. More like: “There are places in this country where black lives don’t matter. You are living in one of those places.”

Consider the coverage of the recent BLM protest on the Bay Bridge. We got lots of data about details of the skirmish — how the demonstration was planned, what the cops did, what one protester said, what jail they were taken to, what the sentencing process is likely to involve.  And once that underbrush was cleared, it was on to the real story: the inconvenienced commuters.

This woman says she doesn’t mind because the cause is worthy. That man says he minds very much and asks: What if there were sick people caught in the jam? A third person doesn’t mind demonstrations (“hell, I marched against the war”) but wonders why must traffic be halted. “We need to get on with the business of living.”

Within 12 hours, that’s all the media was talking about: Traffic-disrupting protests: Justified by social justice concerns, or counterproductive? Perhaps these protesters should work within the system. After all, here in the Bay Area, we are inclusive. We haven’t experienced police violence personally, but we are deeply sympathetic to those who have. Come work with us, and together we will build a new world. As Dr. King said…

Oh, stop it. Black people have been trying to work within the system for 150 years. They’ve become doctors and judges and legislators and business moguls. Some of the superstructure of oppression has been torn down. But still: Percentage of blacks in poverty: 27.4 per cent; whites 8.8 per cent. White people will, on average, live four years longer than black people. Here’s a good one: Five times as many whites are using drugs as African- Americans, yet African-Americans are sent to prison for drug offenses at 10 times the rate of whites.

So how’s that working within the system thing going? How’s the integration boogie going? Maybe something needs to change. Maybe we need to get their attention. What keeps the megalopolis going? Transportation! Let’s fuck up the transportation system and see what happens.

The people in Black Lives Matter are not stupid. (That’s an unspoken assumption in too much coverage.) They know that there will be blowback from disrupting traffic. They’re willing to take that chance, because frankly they’re out of options. They’re screwed from birth. The very system that they’re supposed to work within is heavily privileged towards white people, particularly rich white people.  Rich white people like things the way they are.

Rich white people made the rules, and they own the game. The Supreme Court recently gutted the Voting Rights Act. Does that give you some kind of clue?

So it would be real good if white people stopped giving black people tactical advice. White people should band together and await instructions. Let people who know what they’re talking about come up with a  battle plan.

You know the on-campus wars going on, pitting people who wish to ban hate speech against people who value free speech? It’s a really interesting problem. I have ideas about the problem. But it has to work itself out. There are free speech absolutists in the black community too, and they will speak up — probably quicker if we just butt out. Let the debate rage; let’s debate freely about free speech. Debate is good; turmoil is good; trying not to be the voice that drowns out others: also good.

I know it feels terrible not to have your opinions front and center. But try anyway. It’s a spiritual exercise.

So then there’s this: Chronicle columnist C.W. Nevius wrote a piece celebrating first six figure fine — $217,831.64, to be precise — against a tagger. This “notorious” tagger (COZE or variants) has hit innocent walls, newspaper boxes, driveway doors, you name it. Nevius has been on the graffiti beat for some time; I’m sure he sees this as a turning point.

(A necessary disclaimer: I know Chuck Nevius. He’s a fine reporter and tireless worker and a good clubhouse guy, as they say. I have no quarrel with him. But that C.W. Nevius guy — I argued with him when I was at the paper, and it seems foolish to stop now).

Certainly, the property-owning class does not like taggers. Those who appreciate a calm, orderly city do not like scrawls on their walls. It’s ugly, yes it is. Or, to say it another way, I think it’s ugly. Other people think it’s necessary, or cool, or both. Other people think that disrupting the orderly calm of a commercial monolith might be as good idea.

So it might be useful to ask why tagging exists. I’m not talking about elaborate murals here — everybody loves those, or at least they do now. I am talking about the uncharming, unwhimsical statements of identity that you’ll find on freeway overpasses, bridge abutments and park benches.  The things that say: I’m me, and I’m here.

There are two kinds of tagging. One is gang-related. Deep in the inner city, where government has failed and the police are the enemy, gangs make and enforce the rules. Gangs provide organization for the most wretched of the poor — the strung out, the disabled, the babies having babies, and the babies themselves. 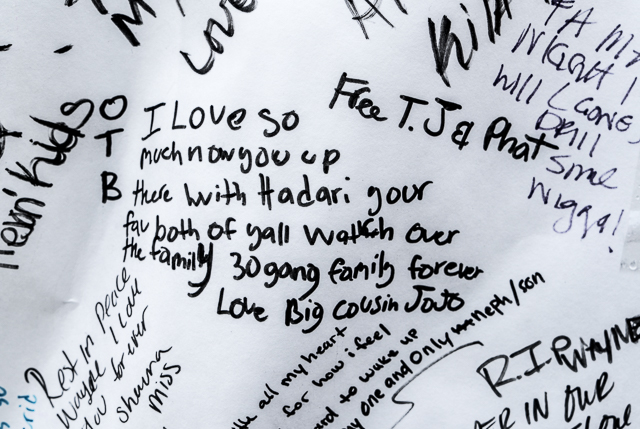 Humans are social, and social creatures require organizations to survive. The gangs are the only organizations that work in those situations. It’s too bad there’s such a high turnover rate in the hierarchy, but it’s better than nothing. Why should this be true? That might be the real story.

Other tags are recreational, usually boys trying to impress members of their crews. That’s a boy thing. (Hispanics are more deeply into tagging even than blacks). People with multiple recreational opportunities usually don’t tag, because tagging is dangerous and illegal. There just aren’t that many white kids involved in tagging. Let us ponder why for a second.

Or just ask: How many hapless apartment dwellers have taggers kicked out of their homes? How many backroom deals have they made with polluters and high volume traders? How many students have they shot in the back? Maybe we should be saving our six-figure firepower — and our already overworked police officers — for crimes that actually, what’s the word I want, matter.

I understand that graffiti is a blight on the landscape. So are hunger, poverty, infant mortality and addiction. Let’s figure out which we hate more.

27 thoughts on “The writing on the wall”